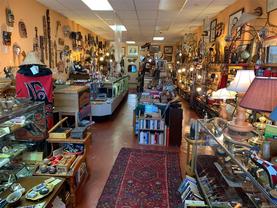 Tale of the Whale in Sooke!! The seller is going to retire after 15 years of enjoyable operation. Quality Sooke Downtown Gallery and antique store. Unique native crafts, antiques, paintings, jewelries and much more. Lots of potential to grow! Affortable rent. The price includes inventory, so it is a turn-key business for a very reasonable price. Don't miss this opportunity to own a famous gallery where you make money and also enjoy Art!!